Working with Representative Maurice West and Illinois State Board of Education to introduce legislation to:

With the potential for ICWA to be ruled unconstitutional by the US Supreme Court, state laws must be passed to save Native American adoptees in Illinois. This has been done in other states.

Why are there no federal or state recognized tribal nations in Illinois?

War, disease, genocide and coercive treaties contributed to the decline and removal of Native people from what became Illinois. The Treaty of Chicago effectively removed all tribal nations from the Territory. Federal policy such as the Indian Removal Act of 1830 was also a significant factor.

How many Illinois tribal nations were there and what were their names?

Illinois is the location of the ancestral homelands of the people of the Council of the Three Fires: the Potawatomi, Ojibwe, and Odawa (adapted from the 1833 Treaty of Chicago). It was also land cherished and occupied by the Menominee, Ho-Chunk, and Miami. At various points in history, this land was occupied and used by the Peoria, Kaskaskia, Piankashaw, Wea, Mascoutin, Sauk, Meskwaki, Kickapoo, and Chickasaw nations.

How many Native Americans reside in Illinois today?

If almost all Native Americans were eradicated from Illinois, why do we have one of the nation’s largest and most diverse Urban Indian populations?

In the 1950s, the United States came up with a plan to solve what it called the “Indian Problem.” It would assimilate Native Americans by moving them to cities (such as Chicago) and eliminate reservations. These Congressional actions are referred to as “Relocation” and “Termination” within the American Indian population.

These actions were eventually overturned in the late 1960’s and early 1970’s ushering in a policy of tribal self-determination. The 20-year campaign failed to erase Native Americans, but its effects on Indian Country are still felt today.

What programs are in place today to serve and support Native Americans living in Illinois? 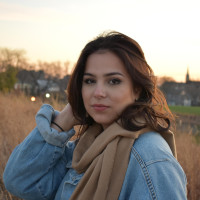 Chicago-based designer, Annabelle Broeffle has been honing her graphic skills since 2016. Broeffle received her BFA from St. Norbert College in May of 2020. She creates various artworks like paintings, photography, animation, and multimedia collage work. The types of inspiration Broeffle finds tend to come from a mix of artists and designers that include Paula Scher, Francis Bacon, and Marshall McLuhan. Currently, Broeffle’s work is design-based, both graphically and physically. Combining an abstract and modern editorial feel, Annabelle creates work that inspires others and connects with her viewers through thought-provoking emotion.

Recently, she has been creating work that is based and focused on the indigenous peoples from around the world, it is creating a series of both graphic and fine art that revolves around the beauty and gracefulness of indigenous women. Annabelle’s evolution to graphic design has introduced her to new methods of art and allows her to express her messages in many more effective and bold ways. Her use of abstraction challenges viewers and invites them to look deeper into a new meaning of work. Visit Annabelle’s website for more of her work.